A demonstration by the three teacher unions at the Dáil has called for publication of a report on Pay Inequality, required under the recent Public Service Pay and Pensions Act, to kick start the process of restoring pay equality. Teachers who qualified since 2011 have already lost up to €30,000 each due to their reduced pay rates.

Pay inequality is having a divisive and damaging impact on teaching and education in Ireland, according to the three main teacher unions.

Speaking ahead of today’s protest on pay inequality in the teaching profession, the presidents of the INTO, ASTI and TUI said more and more evidence is emerging of a brain drain from teaching, as young teachers are being offered full salaries and permanent jobs abroad. As a result, schools in Ireland are experiencing significant difficulties recruiting qualified teachers.

Since February 2011, those who enter teaching are on reduced pay and their projected income losses over a 40 year career, compared to their colleagues who entered teaching just before them, range from €70,000 to €100,000.

INTO President John Boyle said: “This damaging and utterly unfair imposition of unequal pay must be ended. The report required under the Pay and Pensions Act must be a clear first step on the road back to equality. We must also see the end of that road. Does the government really believe in equal pay for equal work? It is time for them to commit to righting the wrong imposed since 2011.”

ASTI President Ger Curtin said: “Unequal pay is causing a brain drain which has the potential to seriously undermine teaching and education in Ireland. Young teachers are being punished by an unfair pay scale and are voting with their feet. Meanwhile other countries are benefiting from our highly educated, talented teachers.”

TUI President Joanne Irwin said: “Teachers and lecturers who entered the system since 2011 are paid at a lower rate than their colleagues for carrying out the same work, and graduates who might formerly have chosen teaching are now choosing other employment options. We are completely unimpressed by the various ‘sticking plaster’ solutions that have been suggested by the Minister and his Department. Pay discrimination must be eliminated to halt the corrosion of the profession.”

The protest comes ahead of a Government report on pay equalisation which is due later this month. 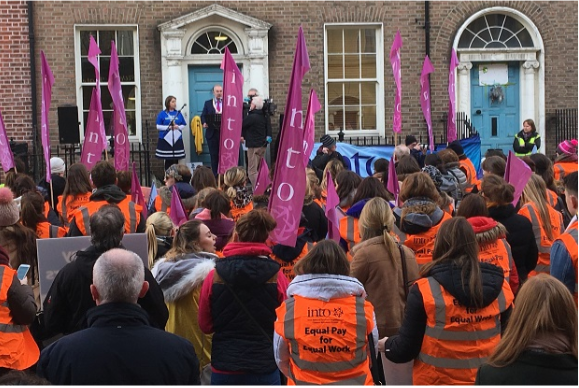