INTO has over recent months worked with a production company on a video to mark “INTO 150”. The film seeks to capture core values of INTO through presenting some of the critical campaigns and activities since the earliest days. The video, 14 minutes long, includes inputs from a number of members and retired members. We thank all who contributed to this project which has resulted in a production which should endure as one commemoration of “INTO 150” (1868-2018). 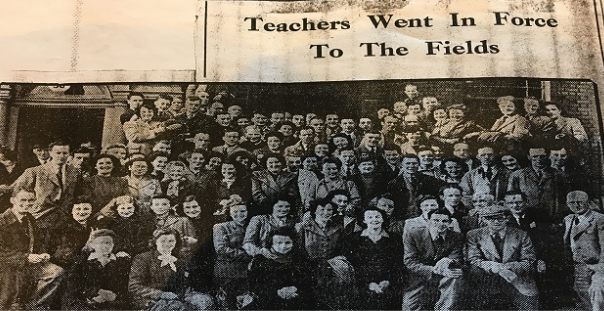 (The photograph on the front of our website, captioned “Teachers Went in Force to the Fields”, is from the Irish Independent of 26 September 1946. INTO members in Dublin had been on strike since March and groups of them volunteered for harvesting work as farmers needed help with harvesting following very bad weather. Having this commitment publicised shows the awareness of the strike committee of the value of ‘good press’. This group is pictured outside the Teachers’ Club in Parnell Square which was in effect the strike headquarters – INTO head office did not move to Parnell Square until the 1960s).