Death of INTO Stalwart, Former President and Dedicated Educationalist Tom Gilmore’s Passing means the loss of a Great INTO Leader 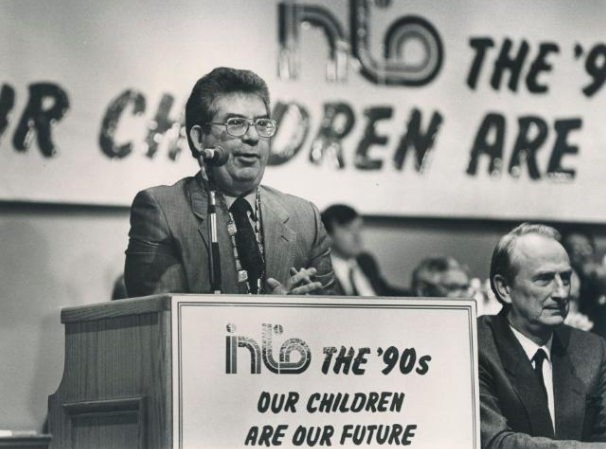 The INTO greatly regrets the passing (on 1 August) of Tom Gilmore. Tom was a long-time friend and colleague of all involved in INTO and our union’s President in 1989 -’90. A source of enormous wisdom and good judgement on trade union and education issues, Tom was a native of East Galway and began his teaching career in the West in his year of qualification, 1951.

On his move to Dublin in 1958 (where he would later become Principal of Mourne Road Boys’ School, Drimnagh), Tom’s INTO involvement deepened. Elected to the Central Executive Committee (CEC) in 1966, he was re-elected annually to that body for a remarkable 25 years, up to 1991.

Tom Gilmore was always a leader – at INTO branch meetings, on the CEC and at Annual Congress. His inputs were thoughtful and influential; he did not indulge in theatrics but argued logically, calmly and often forcefully. From his early years on the CEC, he negotiated on key issues for INTO, including at the Ryan Tribunal which brought about a common pay scale for teachers, on pensions and on the ending of the Primary Certificate examination. He was a pioneer of INTO Officer training, led the INTO team on the government’s Primary Education Review Body (PERB) 1988-`90, and he chaired INTO Congress 1990 in Tralee as President.

A widely-read, erudite man, Tom’s advice was highly valued by INTO members, whether on individual queries or on policy questions. In more recent years, Tom Gilmore served, on INTO’s nomination, as Vice-Chair of the NCCA (National Council for Curriculum and Assessment) and he participated actively in the RTAI (Retired Teachers’ Association of Ireland). In common with the late John Coolahan, Tom attended as a guest at the 150th
INTO Congress in Killarney at Easter; he remained perceptive and great company and maintained a lively interest in the welfare of teachers and of the INTO.

Members who knew Tom will join in mourning his passing and in offering our sincere sympathy, and our gratitude for Tom’s service to INTO, most particularly to Tom’s wife Annette and to their sons Chris and Andrew.