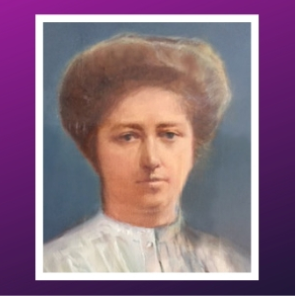 Catherine Mahon
This year on International Women’s Day we are championing Catherine Mahon, the first ever female president of the INTO. Catherine Mahon (1869-1948) worked towards #BalanceforBetter by advocating for equal pay and women’s representation throughout the union.

From its establishment in 1868 the INTO had women teachers as members, however it was during the decade 1906-1916 that the INTO became more focussed on women’s issues. The first indication of change towards gender parity for teachers was the publication of the ‘Lady Teachers’ Own Page’ in the Irish School Weekly in February 1906. The page, written by Kathleen Roche, was “exclusively devoted to the interests of lady teachers” and a source of inspiration to Catherine Mahon.

In 1907, Catherine became the first elected woman on the Central Executive Committee. In 1912, she became the first female president of the INTO. Catherine fought for equality issues such as equal pay, representation for women teachers on the INTO Executive, and equal distribution of the Birrell grant. She also led women teachers in the fight against the enforced teaching of cookery in national schools, and worked hard to recruit new members, especially women, into the INTO. During her presidential term, Catherine’s leadership and lobbying skills won widespread public and political support for the INTO.

International Women’s Day Classroom Resources
The International Women’s Day website has a number of classroom resources that can be used in schools to help educate and inspire children about the role of women in society. The resources celebrate women’s achievements and challenge gender stereotype and bias. They have been developed in collaboration with Penguin Random House, Teach Starter, and DreamWorks Animation.